Alston Chapel United Holy Church of America is located in Pittsboro, NC. The baptistry painting in their newer sanctuary was painted by Stacye Leanza. 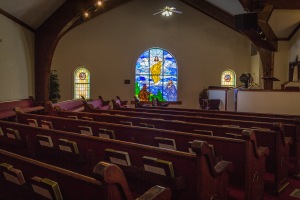 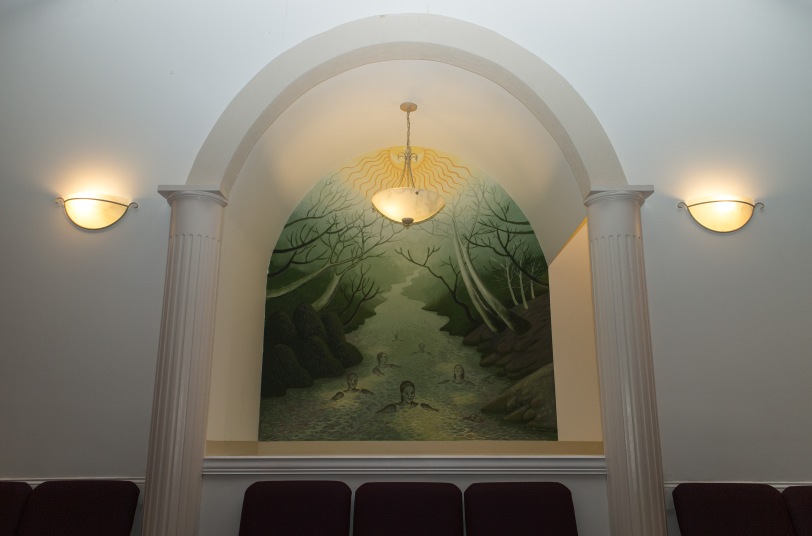 This  baptistry can be entered from one side only.

Sheila’s notes: This is a beautiful painting, and no photograph can do it justice! We were honored that the artist, Stacye Leanza, agreed to meet us at the church to be interviewed for our project.

Jill notes: The baptistery paintings we have discovered thus far in North Carolina churches are of three primary types. One type depicts the Jordan River, sometimes including local vegetation or other geographical elements. A second type depicts a local river or other body of water. A third type includes architectural structures (such as houses, churches or crosses), animals (such as a dove), or human figures.

An example of the third type is a painting done in 2000 by Stacye Leanza for Alston Chapel United Holy Church of America, Inc, in Pittsboro, NC. The pastor of Alston Chapel at the time, Reverend Carrie Bolton, commissioned the painting and requested that all races be represented in it. Leanza used photos of the Jordan River to envision the landscape. The outcome, said Leanza in an interview, is a “representation of the Jordan River” that includes people from diverse ethnic backgrounds in the water. Leanza says that she was “aiming for a sense of surrender, peace, and acceptance on the people’s faces.”

Leanza also did a baptistry painting for Holy Trinity Church in Siler City, NC and “would love to do more of this kind of work” in the future (see /http://www.leanza-art.com). The Holy Trinity painting includes the figure of Jesus in the water with the figures of two people being baptized.

Leanza’s painting is in Alston Chapel’s newer sanctuary. The church’s former worship space, now used as a fellowship building, also has a baptistry painting over the place where the baptistry was. This painting was done by Mary O’Tuel and is a more traditional rendering of the Jordan river, similar to the three Jordan River “views” advertised on the O’Tuel’s website (http://www.christian-artworks.com/) Please refer to our blog post “Alston Chapel Fellowship Hall’ for photos of this baptistery painting.

The United Holy Church of America, a predominantly African-American Pentecostal Holiness denomination, was founded in 1886 in North Carolina. The headquarters is in Greensboro, NC.